To date, Asia Aboubakar is still fighting back tears when she narrates about how her life and that of her son was saved by Kondoa SAM (Social Accountability Monitoring) team members.

Asia, a young mother from Kwamtoro Ward in Kondoa district, decided to name her beautiful and healthy child SAM, as a way of showing her gratitude to the team that saved their lives. “ If it wasn’t for the human decision and sacrifice made by SAM team, my son and I would be dead by now”.

Back in 2012, Asia became pregnant and was expecting her baby in November. “I started to experience labor pains and visited a nearby health center here in Kwamtoro. The nurses did some medical check ups and came into conclusion that my baby was too big for an ordinary delivery. To avoid further health complications, the nurse in charge immediately referred me to Kondoa district hospital. That was early in the morning.”

That fateful referral started with nurses asking Asia to buy airtime (voucher) so that they (nurses) can request for an Ambulance from the district hospital, located almost 100 km from Kwamtoro. This did not amuse her but she had no choice. Still in pain, she gave them some of the little money she had saved. A few minutes later, one of the nurses told her that there was no Ambulance to take her to Kondoa hospital and that she should look for other alternatives. 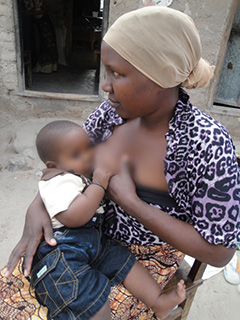 “I was frustrated and confused. What was I going to do? Was this the end of my life and that of my baby’s? I lost hope and started weeping while saying my last prayers. Shortly, the SAM team from Kondoa passed by the center and found me in agony. They asked about health services at the center and I expressed my situation. The team left, but promised to follow up and come back to make sure that I received the required services. I listened to them but in my heart, I did not believe that they will come back to help me, an ordinary village woman who they just met.”

Late in the evening, the team went back to the center on their way to Kondoa town. To their surprise, Asia was still there, frail and almost fainting, just waiting for her fate. Filled with grief, the team decided to discontinue with their trip to save Asia and her unborn child. They spent the night at the village and let their private car be used to transfer Asia to the district hospital. Next day early in the morning, Asia’s baby was born through caesarian – section weighing 5.5 kilograms.

Enquiring further about the lack of Ambulance at Kwamtoro health center, SAM team was told that a Land Cruiser was allocated for the center. ‘It is very unfortunate that it was being used by some district executives who were attending other important government duties’. This is how the misuse of Ambulance endangered mother and child’s lives!

The best way to prevent and slow down transmission is be well informed about the COVID-19 virus, the disease it causes and how it spreads. Protect yourself and others from infection by washing your hands or using an alcohol based rub frequently and not touching your face.